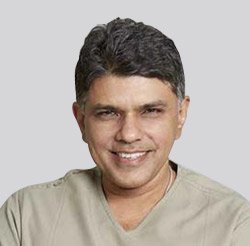 Dr. Lakdawala graduated from the prestigious Grant Medical College in Mumbai and did his Masters in Surgery from BYL Nair Hospital. He went to train further in bariatric surgery at Cleveland clinic in USA and at University of Ghent hospital in Belgium. He also trained in advanced colorectal cancer surgery in Seoul, Korea.

Dr. Lakdawala is the Chairman of the Institute of Minimal Invasive Surgical Sciences and Research Centre at Saifee Hospital, Mumbai and also heads the Section of Laparoscopic GI Oncology. He was the first surgeon in western India to perform a total laparoscopic Whipples pancreatico-duodenectomy for cancer of head of pancreas.

He is also deeply involved in training younger surgeons and is a Professor at the Maharashtra University of Health Sciences. Every year 4 post MS candidates train under him for bariatric and laparoscopic surgery. He regularly runs live surgery workshops and has been invited to conduct teaching workshops in almost every Asian country like Malaysia, Indonesia, Thailand, Vietnam, Bangladesh, China, South Korea, Sri Lanka and Middle East.

He was also the first Indian surgeon to transmit live surgery to USA in the Obesity Week organized by the prestigious ASMBS (American Society of Metabolic and Bariatric Surgery) first of its kind, Indo-Italian collaborative Revisional bariatric surgery workshop has been planned for April 2016 at Naples, Italy where Dr. Lakdawala will join forces with the immediate past president of IFSO, Dr Luigi Angrisani

He has been a part of some very prestigious committees like the IDF committee that formulated the new guidelines for bariatric surgery for Asian patients. He was one of the co-directors in the international sleeve gastrectomy expert panel in Florida in 2011 and also the IFSO-APC consensus statement in Japan in 2011. Dr. Lakdawala is on the board of Asian Endosurgery Task Force (AETF). To add another feather in his cap Dr. Lakdawala is the President elect of IFSO- Asia Pacific chapter and will assume presidency in the year 2017.